One of my favorite YA book series, The Luxe by Anna Godbersen, will soon be getting a Hollywood movie makeover. Which has me kinda concerned as it's being described as "a young Moulin Rouge."
That worries me because, for one thing, this book is NOTHING like Moulin Rouge, and secondly, i HATED Moulin Rouge! So. Fingers crossed they won't fuck this one up.

Ally Carter's Heist Society (which is TBRing it on my shelves right now) will also be going from book to movie soon, with Drew Barrymore signed on as one of the producers. No word on who will star in it yet but i'll keep you posted.

Popular kid-lit, The Invention of Hugo Cabret by Brian Selznick, which will apparently be known simply as Hugo in Martin Scorsese's movie version, finally has a trailer out. Check it out:

Two words. Hit. Girl!!! i think Chloe Moretz is beyond awesome! Plus she's got a really good British accent! The movie looks pretty interesting. i still haven't read the book yet but i'm thinking it might need to be added to the ol' teetering TBR pile.

And now, finally, the Harry Potter finale goodness! So...


Depending on how far you've read/viewed:
MAY CONTAIN SPOILERS!

So, other than breaking all kind of box office records, Harry Potter and the Deathly Hallows Part 2 is fucking AWESOME!!! OMG!!! So obvs i just got back from seeing it. i went with 2D but, honestly, i kinda wish i had sprung for that extra D.
The special effects were incredible. The whole movie is so super tense. When i left the theater my legs were stiff from being scrunched up so tight. i was worried bout my peeps, y'all.

Stand-out moments? Lets see...
Not to sound like a perv or anything but the Ron/Hermione kiss was swoontastic!
Molly Weasley kicking Bellatrix's ass. And calling her a bitch!
Neville champing it up all while rocking a Cosby/Mr. Rogers hybrid sweater like only Neville can.
Also Neville slicing Nagini is truly a cheerworthy moment.
Snape! Oh the Snapeyness!
Harry's badass wand fight against Voldemort.
Snape's emotional flashback. Alan Rickman did a phenom job of taking his character from monotone to vulnerable.
The dragon ride was so visually amazing.

Ok. For reals? i totally wanna go see this movie again!
However, my advice to you, dear friends, would be this:

When you go--- DON'T take a Muggle with you. They ask too many questions which then distracts you, a Hogwarts alum, from completely enjoying the movie. Seriously. At one point my mom turned to me, gasped and said "Oh my God! Is Snape Harry's daddy?!" Mom. Seriously? Calm it down with this ridiculousness. Now lets go get our 3D tickets for next weekend. :) 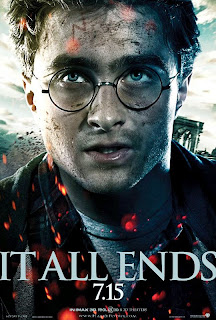